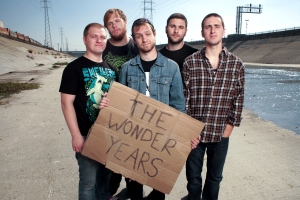 The Wonder Years have had a busy summer, from killing it all summer on the Vans Warped Tour to announcing their new album, No Closer To Heaven, and releasing now their second single from the album, “Cigarettes & Saints.” The band also just released the brand new music video for the single, which begins as a stunning ballad, before gaining momentum, and leaving you completely entranced. The video is just as awe-inspiring. See for yourself below!

No Closer To Heaven will be released on September 4th via Hopeless Records. You can preorder the album here. All preorders include an instant download of this song and the first single released, “Cardinals.”

To hear more from The Wonder Years in the meantime, you can purchase a CD here or buy concert tickets here.