It’s that time again: 15 tracks you HAVE to hear for February 2015…and the accompanying music videos you have to see. This month, we’ve got love, lust, hatred, and more; nothing the “month of Love” cannot handle, right?

Anyway, check out some of these amazing tracks below: 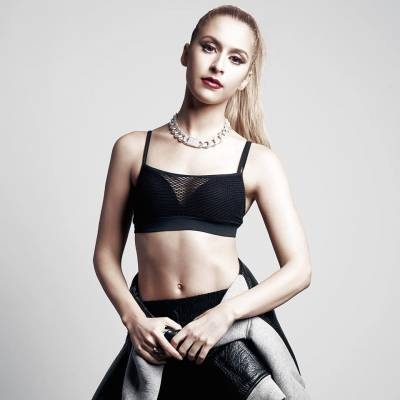 Former The Voice France contestant Diana Espir premiered her music video for “Tomboy” feat. Nelly yesterday exclusively at Fuse. The video, produced by Uriel “Frenchie” Kabouch and directed by Jawney QVEST and Lanz Pierce, “expresses a positive message about the equal relationship between a girl and her guy friends, making a lighthearted statement about female empowerment.” “Tomboy” is now available on iTunes. You can also stream the video below:

“The aim was to make this video as raw and genuine as possible,” Diana told Fuse in a recent interview. “We made sure we had drinks and a fun time together; Invited our friends to create this cool energy and be able to show it on camera.” You can get an exclusive behind-the-scenes look into the making of the video here.

Swedish indie-pop artist Tkacuk just released his new single, “Final Curtain,” describing the typical situation of a mistake and the argument that unravels as a result, especially as our protagonist comes to the realization that he feels no remorse. In an effort to escape, Tkacuk croons, “Looking at your face, I know that I have hurt you. Looking back at this evening, I know that I have fucked it up. Sitting on the bed next to you, I am aware that I cannot and do not regret it. So all I can whisper is ‘We won’t solve this tonight, let’s just go to bed.’”
The single stems from his latest EP, Borders & Land, which dropped on the 19th of February. The follow up to his experimental Dark/Light album, the new EP is a change of direction of Tkacuk, and you can stream the single below as proof:
Tagged Borders & Land, Dark/Light, Final Curtain, indie-pop, planet stereo, stream, Swedish, Tkacuk
Leave a comment
News

Los Angeles based singer/songwriter Julian Moon has just revealed the details of her brand new album. Good Girl is set to be released on March 24th via Warner Bros. Records, marking her full-length and major label debut. The album was produced by Greg Wells (Adele, Katy Perry) with all songs primarily written by Moon herself. “Good Girl is choosing how you want to be seen and understood, and knowing that it is ok to be complicated, unpredictable and confusing.” she explains. “Good Girl is my autobiography and a social commentary on being a girl in this day and age. These past few years I have learned that people are complicated, and try as you might to peg them down as a good girl/bad girl/loser/popular – in reality we are all just beautiful, chaotic messes of contradictions. This album is here to hold space and give permission to those who can’t and won’t be pigeonholed.”
Good Girl Tracklisting
1. Good Girl
2. Rebound
3. How To Break A Heart
4. 2AM
5. One Penny
6. Popularity
7. A Cup Of Coffee
8. Who We Are
9. Just Go With It
10. Loser
Tagged Adele, album, Good Girl, Julian Moon, Katy Perry, new, planet stereo, track listing
Leave a comment
Album Review

Sarah McGowan kicks off the EP with “Williamsburg Boy” a laid back, beach/indie-rock quality. There is a sweet sense of innocence to the track; a love song that seems to appreciate all the little things, with a sense of comedy: “I would literally fucking die.” There is a bittersweet moment when, as the listener, we find out that the love is unrequited. But perhaps after hearing this catchy track, the boy in question will change his mind…

With swelling, but subtle instrumentals, “Molly” delivers big time with its quiet surprise. A modern day “Jolene,” with a bit more of a rock edge, McGowan doesn’t hesitate to wear her heart on her sleeve and let out a heart wrenching plea.

The title track of the EP, “Indian Summer,” is filled with dramatics, and proves to be powerful, both vocally and musically. It’s eerily beautiful to hear such a strong voice so unafraid of baring her soul to whoever will listen. “When I Come Home” follows perfectly and is a stunning indie pop single that has a slight country twang that really breeds character and beauty into each line. Between McGowan’s transcendent vocals and poetic lyrics, she produces quality music that entertains and tells a story; the narrative quality stands out beautifully as McGowan pleads for a change in a relationship with a person who doesn’t seem to know what they want.

Overall, McGowan seems to effortlessly deliver with Indian Summer. Her raw power is unbelievable, and just one listen will have the masses entranced.

NYC-based singer/songwriter Sarah McGowan releases new single “When I Come Home” from debut EP Indian Summer. You can listen to the track below:

Bicoastal singer/songwriter Franki Love has released her brand new single, “Walking Wounded,” from her upcoming album, OTIAS, due out later this year. “I wrote ‘Walking Wounded’ late one night at the piano,” Franki tells Cliche Mag. “After my mom passed away from cancer, I was being mentored by music producer Phil Ramone who encouraged me to sit at the piano and start writing. I wrote this song about how we’re all connected as one – if one person is hurting, then we are all walking wounded.”

The incredible new track was produced by Grammy award-winning producer David Kershenbaum, who also produced two other songs on OTIAS.

A classically trained pianist, Love began playing music at four, and has since garnered success at the LA Music Awards, where she took home the award for “Female Singer/Songwriter of The Year,” as well as “Single of The Year” for her hit “Shadow.” The official music video for “Shadow” was also nominated for “Best Music Video” at the Hollywood Film Festival.

Franki’s upcoming album OTIAS was funded via Kickstarter. The album is dedicated to her mother, who passed away in January 2013 due to cancer. You can stream the single, “Walking Wounded,” below:

Echosmith is gearing up to perform their new single “Bright” on the February 27 episode of Live! With Kelly and Michael, and again on March 2 with Late Night with Seth Meyers. Additionally, just this week the LA-based siblings received a nomination for the Nickelodeon Kids’ Choice Award for Favorite New Artist, up against the likes of Meghan Trainor and Iggy Azalea, with voting live now through March 28.

“Bright” has already been climbing the charts at both Hot AC and Top 40 radio since its debut earlier this month, and MTV and VH1 recently premiered the accompanying video, which you can view below:

Echosmith is currently out on their first, official headline tour – nearly sold out for all dates – in support of their 2013 debut album Talking Dreams. They’ll be all across the U.S. through the end of March, and remaining tickets are available at Echosmith.com/tour.

Last week at an Enter Shikari gig in Portsmouth, U.K., frontman Rou Reynolds entered the crowd toward the end of “Radiate” with the intention of finishing the song among the people. As you can see from the brief video below, Reynolds wasn’t too pleased with the actions of one particularly invasive crowd member, throwing a series of quick punches the concertgoer’s way after that person reportedly groped Reynolds and attempted to pull his pants down.

Just seen this video and in order to stop speculation just thought I’d clear up what happened.

After performing the end of ‘Radiate’ in the crowd some people behind me began trying to pull my trousers down . I tried to push them away a few times but due to the density of the crowd this didn’t work. It then progressed (perhaps fuelled by some sort of stubborn oneupmanship) and I began to have my buttocks and my… er, ‘undercarriage’ groped. At this point I spun round pretty shocked and intimidated and asked angrily if they “wanted a punch” – lighter approaches having not worked! – hoping his would stop it.

That seemed to do the opposite and gave them more vigour. I defy anyone to have their scrotum grabbed and not lash out instinctively…

Obviously violence is never the answer and I’m very unhappy personally with how I acted. I should have left the crowd and headed back to stage immediately when this started happening but due to the density of the crowd and the intensity of the situation things played out differently, I’m only human.

The rest of the show was thoroughly enjoyable and the audience overall were great. Everyone else we met before and after the show was absolutely lovely too. It’s a shame but obviously because of this incident I won’t be heading into densely packed crowds in the near future.

P.S. To address the “they paid to see you, so it doesn’t matter what they did…” argument; the ticket price for an Enter Shikari show doesn’t include free access to my gonads I’m afraid. You’re not a doctor. And I’m not a prostitute.

We appreciate & respect every single person that supports us and all we ask in return is respect back. The way this person/people acted was not respectful whatsoever.”

Of course, being groped during a performance is not an unfamiliar occurrence in the entertainment industry, but that doesn’t mean it’s right. But what about Reynolds? What do you think: was he in the right?

Alt-pop group Priory have announced the release of their full-length Warner Bros. Records debut, Need To Know, expected to be out on April 7th. Recently deemed an MTV 2015 ‘Artist To Watch,’ the Portland-based duo will embark on a North American tour with Britpop band Kaiser Chiefs, and make appearances at SXSW, Governor’s Ball and Bonnaroo. Tickets are on sale at http://prioryband.com.

Deemed a USA Today ‘On the Verge‘ artist and TIME ‘Artist You Need To Hear,‘ Priory also performed on VH1 Big Morning Buzz Live and FUSE’s Trending10. ‘Weekend’ was featured on ESPN Sportscenter Gameday throughout the football season, and the band’s music appears in the latest Taco Bell commercial.
Below, you can view the artwork for Need To Know, as well as the band’s tour dates.